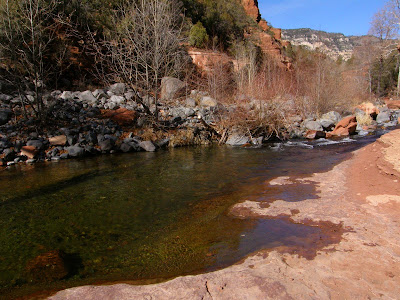 Winter can be a fickle time for fly fishing in many watersheds, and dependent on the whims of the weather. Oak Creek proved no different in this regard during January, and I tried to make the most of windows of mild, sunny days wedged between snowstorms. 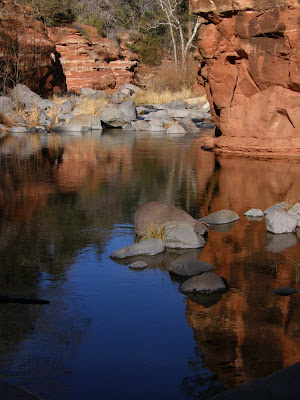 Fortunately, I enjoyed some beautiful weather towards the beginning of the month (before the major storms of the season shut down fish activity for the remainder of the month, not to mention February), and fit in a few days to prowl along the banks of Oak Creek in search of wary trout. 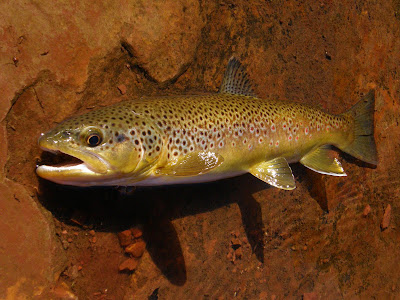 I managed to find some success on a single day, coinciding with a Blue Wing Olive hatch in the afternoon, and landed my first (three) fish of the year, beginning with the lovely 18" hen Brown shown above. Fittingly, this was the same large trout I have caught and released on several previous occasions (reaffirming once again the benefits of catch and release within a wild trout stream, especially one like Oak Creek, where the larger fish are relatively uncommon, and precious in maintaining the health of the overall trout population, not to mention providing an opportunity for other anglers). I fooled the Brown on an olive #20 Parachute Sparkle Dun (as pictured below), cast from a crouching position up into a nice run. 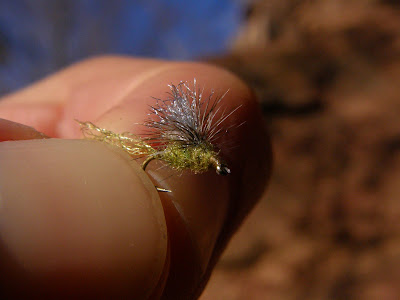 I caught two other fish on this particular day, and they were both memorable in part because they came from likely runs that have not yielded trout for me in the past. 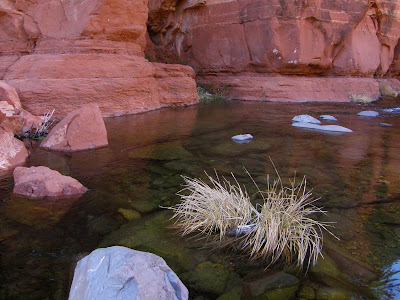 The first of these fish materialized from the glide above, near the tail by the dead grass clumps. The BWO hatch was still in progress, and I spotted a dark form that quietly nosed above the crystalline current to intercept a drifting mayfly. I tied on a tan #16 Parachute Sparkle Dun, and flicked the pattern upstream. On the second cast, the dry drifted down into the right spot, and the trout calmly rose to inhale it--always a timeless moment in fly fishing, both nerve-wracking and wonderful. 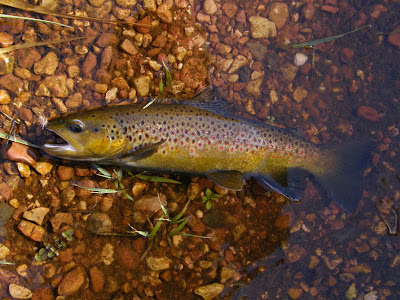 The riser thrashed about, and then charged downstream, bolting for cover under red sandstone boulders. I steered the fish away from the snag-ridden structure, and pulled a dark, vivid male Brown Trout to shore, this one measuring a solid 14"--a great fish any time of year, and certainly in the heart of winter. Note the dry fly emerging from the upper jaw in both images. 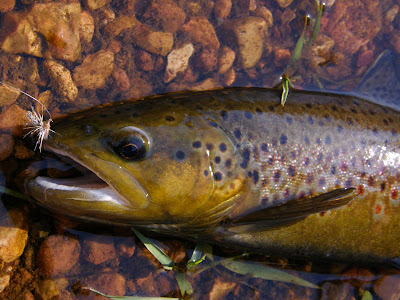 I continued upstream after watching the handsome fish return to its run, and came across a female Common Merganser near the head of a deep pool, no doubt also searching for unsuspecting trout. 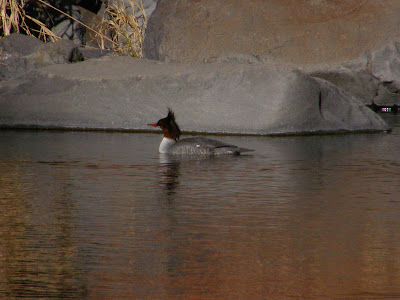 I made my way to another deeper run, and approached the head, framed by a snag that had recently fallen into the stream from a winter storm (the tree swept downstream later in the month, taken by elevated flows during the heaviest storm of the season). 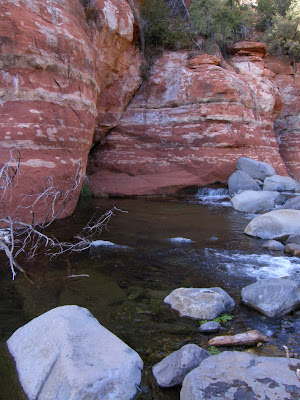 The Baetis hatch was waning, but some duns were still drifting down through the currents. I sat and watched the run, and finally saw a subtle rise, that appeared to be subsurface. I tried casting a couple of dries through the run, with no response, so I switched to a #20 BH Copper Emmons, and let it sink slowly under the surface. Sure enough, the line tightened, I lifted the rod gently, and found myself attached to another strong fish. This trout proved stubborn, and dove repeatedly to the depths of the run (but thankfully didn't make for the snag downstream). 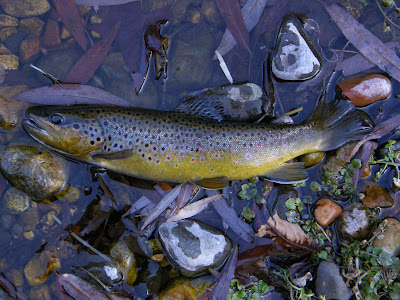 Eventually, I coaxed the fish to shore, and gazed down at another fabulous wild Oak Creek Brown, this one just a shade beneath 15", and a classic-looking, gold-bellied mature male. 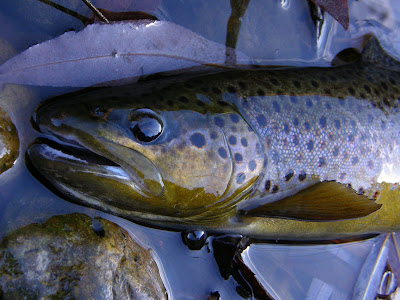 There is something satisfying about getting to know a stream, especially a complicated and often demanding one like Oak Creek, and uncovering some of its treasures in the form of wily older Brown Trout, in runs that have eluded me in the past, makes the process even sweeter. Wild Browns in such places are endlessly fascinating to me; they can be cautious and discerning to the point of impossibility, and then at times they seem to let down their guard (a little), and become marginally catchable, if all goes right. Moments like these are one of the reasons that keep me returning to fish again, and continue the learning curve. 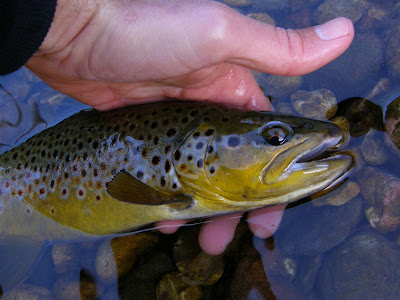 Here is one last image of the Brown Trout, as I prepared to slide him back into the icy currents, and watched the fish descend back to his watery lair. 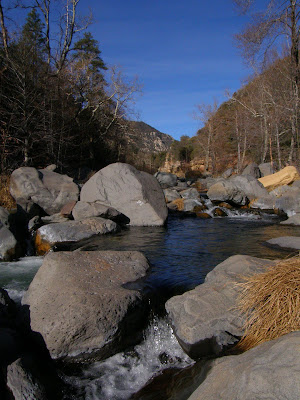 The final Brown above marked the last fish I caught for January, and while I did spot a few other spooky trout on following outings, I was unable to convince them to take my offerings. 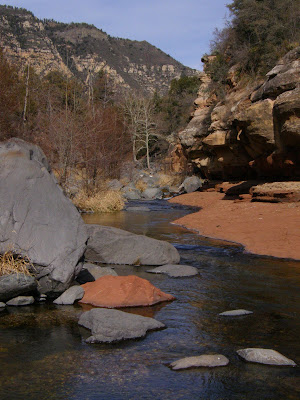 I did enjoy more sunlit weather though, and captured a few more images of beautiful Oak Creek winding its way through breathtaking settings. I feel fortunate beyond words to call this stream a regular haunt, every day I wander along its banks. Even when no trout are brought to hand, winter provides a measure of solitude and peace here that is hard to match in the warmer and busier months, when the masses inevitably return. 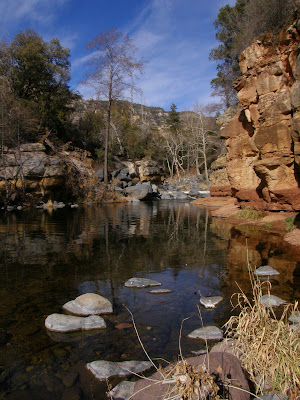 I included one last image, of a small Blue Wing Olive perching precariously atop my thumb, embodying the promise of more hatches to come, and the living cycle in general starting anew, with the advent of spring not so far away. 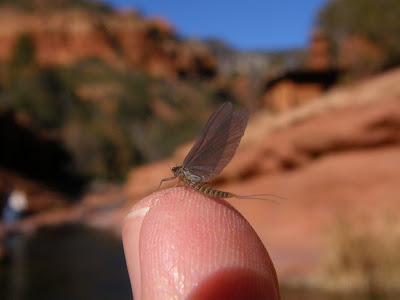