I made a trip through SW Missouri to sample some of the fishing opportunities in that corner of the state, on the way towards Kansas City to pick up my wife at the airport, and continue west. I had heard stories of excellent wild Rainbow trout populations in the North Fork of the White (in addition to stocked Browns that sometimes reach prodigious sizes), and Crane Creek, one of the most well-known spring creeks in the state. Here is the North Fork pictured below. 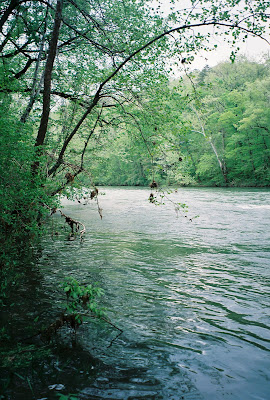 While it may be difficult to surmise from this photo, the river was in flood stage at this time, much higher than regular flows, and fishing was difficult at best. I managed to hook a single fish while nymphing, a beautiful, heavy 17-18" Rainbow that charged through the heavy currents for some time before I could at last land and briefly admire it--a good fish for this river, from what I've heard. 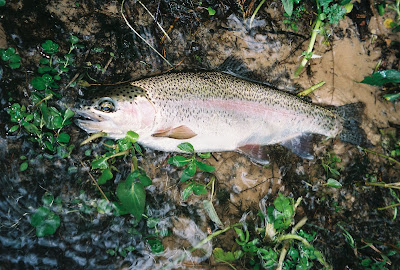 The colors of the trout are a bit washed out in the picture, and do not do it justice. I was using an automatic film camera at the time, and I was not able to get the richness of hues that I would have liked. This issue resurfaces in some of the images below, and also in many of the photos from the previous post. Fortunately, I started using my wife's digital camera exclusively beyond this trip, and an improvement in picture quality is noticeable in future posts.

At any rate, I moved on to Crane Creek, a clear, spring-fed gem populated with pure-strain Mcloud Rainbows (originating from northern California, and one of the last known streams to contain a genetically pure population of these redband trout). I've heard this creek has suffered from low water in recent years, but has a reputation for incredibly spooky and sometimes big, strong fish. As luck would have it, the heavy rain and flooding on the North Fork and throughout the Midwest at this time raised the levels on Crane Creek, but to still-fishable levels, and stained the usually clear water, making the larger trout a bit less cautious. I have found nymphing and streamer fishing to be especially effective on these occasions, and this time was no exception. In short, I experienced some spectacular fishing for supercharged wild Rainbows, and caught a number of fish in the upper teens, that fought and often looked like miniature steelhead. Here is a 16-17" male (again, the colors were much more brilliant than the photo suggests), that repeatedly went airborne and raced about a jade pool. 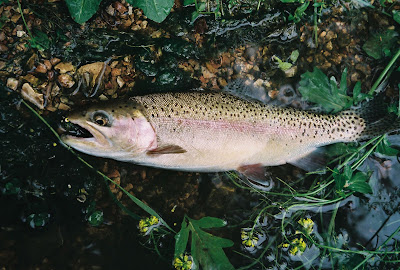 Note the #10 Marabugger protruding from the mouth--the bows hammered this pattern in olive and black throughout the 3 days I fished here. The creek flowed through a jungle of vegetation, with different shades of green seemingly everywhere. Another view of Crane Creek, with rain falling heavily, including on the camera lens... 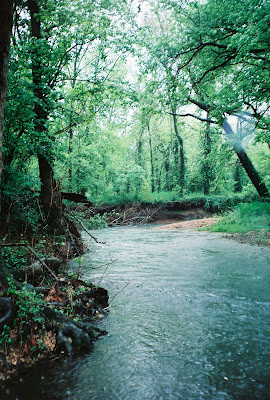 Many of the runs in this stream were characterized by riffles pouring into deeper pools, and the best fish often seemed to hold right where these features shifted from one to the other, such as this impressively fat 21" female bow, which must have weighed 4 lbs or more, proved to be a tireless fighter, and turned out to be the largest fish of the trip. 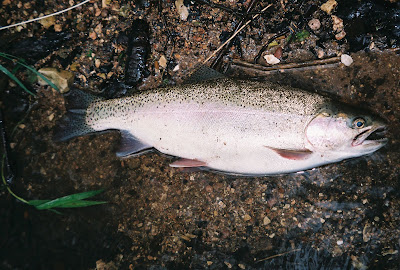 Crane Creek lived up to its reputation, and far exceeded my hopes in terms of large wild trout caught and released. I would highly recommend this lovely stream to anyone passing through SW Missouri. It holds a precious strain of Rainbows, and the wild beauty of the fish and the creek itself, flowing right through the backyard of its namesake town, is nothing short of miraculous. 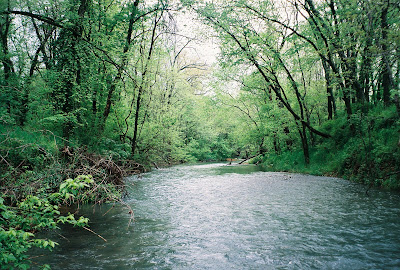