There are certain days that linger in the mind of an angler, days that shine in the memory banks for the superb fishing and overall experiences they offer.  One recent outing to the walk-in area of Lees Ferry in early May provided such a day, when the flows were ideal (meaning low and extremely wadeable), the scenery was typically breathtaking, and the fishing was exceptional throughout the day, with seemingly every trout in the river showing an interest in feeding on any halfway convincing offering drifted its way. 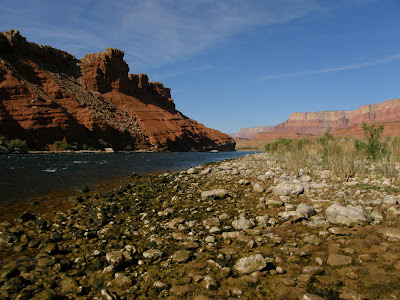 I started off using a #12 beadhead tan San Juan Worm with a #20 black midge larva (kind of a cross between a Brassie and Zebra Midge) as the trailer, both tied on 5X, and stuck with this setup the rest of the day.  Trout took both patterns, although more of the bigger fish landed seemed to prefer the larger fly. 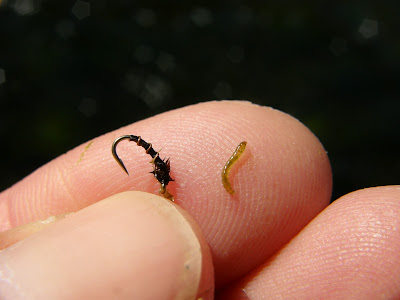 Here is a simple midge larva pattern, with a black thread body, a few turns of copper wire for ribbing, and a peacock herl head, set next to a little olive natural that the fly was meant to imitate.  Based on the enthusiastic reaction of the fish, it seemed to work well enough. 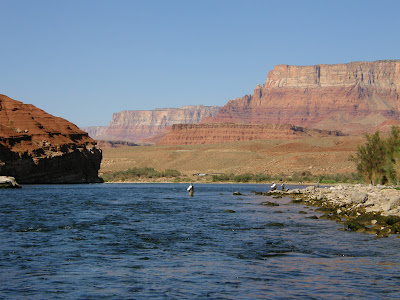 A number of folks were already fly fishing in the vicinity of the big boulder and further downstream towards the Paria River confluence, so I started casting along the bank upstream, making my towards the upper boulders area. 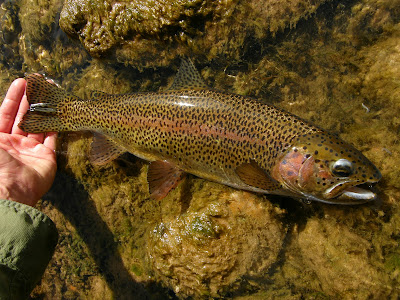 I quickly tied into an energetic, beautiful rainbow stretching just beyond 16" that charged through the currents, showing an unyielding strength that seems so representative of wild Lees Ferry trout. 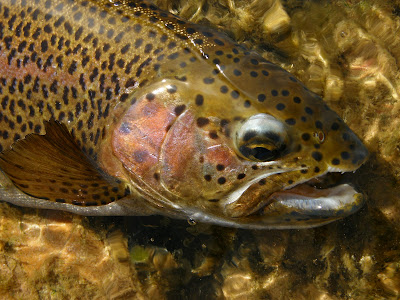 The bow was heavily spotted, with a warm splash of rose on the gill plates and sides, set against a bronze, golden-olive coloration that matched the hues of the algae clinging to the stones perfectly. 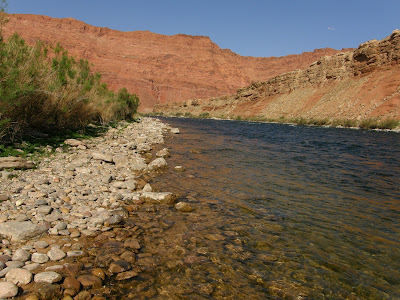 I continued casting and wandering upstream near shore, watching the tip of the fly line for any telltale hesitations, twitches, or more dramatic pulls.  I was struck once more at the grand scale of this landscape, and the bold colors that seem to pop from every corner. 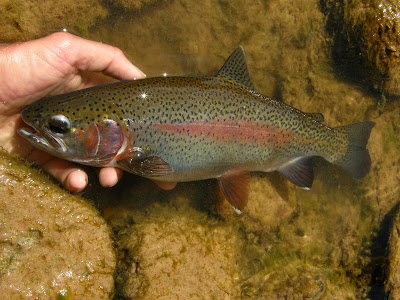 Fish struck at my offerings with some frequency, including this chunky 14-15" bow that fought above its weight class and tried its best to wear my arm out. 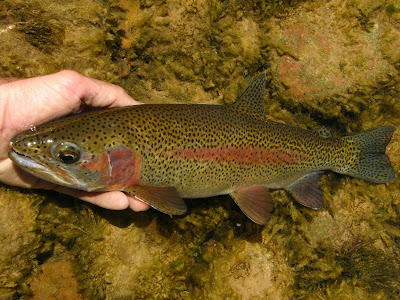 I found a gorgeous 16.5" male rainbow on the end of my line as I came close to the boulders area.  The buck showed some brilliant coloration, and reminded me of native redbands from some of my old stomping grounds in central Oregon. 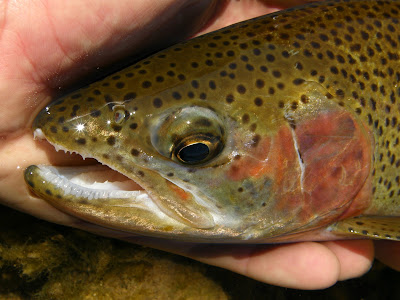 The fish showed some teeth and the beginnings of a kype too, ranking as one of the most memorable, striking fish caught on the day. 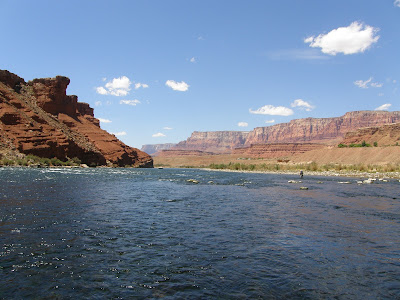 The image above shows the sweeping montage of Lees Ferry in the walk-in area, looking downstream from the lower boulders area.  The small dark dot in the center right is an angler working a run near shore (he caught a vivid male rainbow in the 17-18" range in mid-afternoon as I was walking nearby), reaffirming the wide open country here, and putting mere human concerns in humbling perspective.  The flows were low enough that one could wade almost to the opposite bank at this location, opening up a lot of water to fishing.  Needless to say, I crossed paths with numerous trout here, ranging from dinks to fat fish in the low-mid teens that could throw their weight around and use the currents to their advantage. 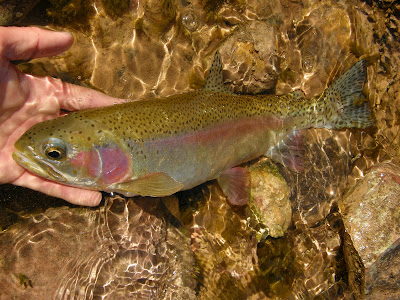 I circled back downstream in the afternoon and retraced my steps from the first part of the day, casting out from the bank into likely seams, slowly heading upstream to the boulders area.  I found both of these rainbows in the 15-16" range along the way, and was struck by the overall healthy condition of the trout, and also the endless variability of individuals in terms of coloration, spotting patterns, and overall appearance. 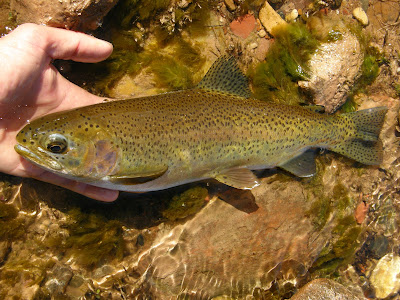 Eventually, I returned to the boulders area, and cast into every likely pocket and seam I could reach, stripping excess line rapidly, watching the line intently, only to cast once again. 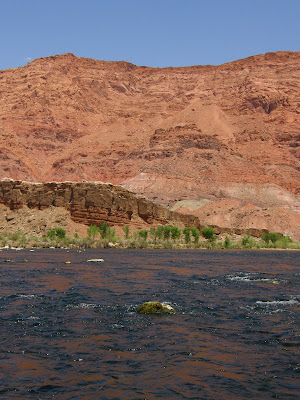 With the red cliffs looming above like massive sentinels, and the chilled currents of the Colorado sliding below with their own music, the fishing took on a rhythm of its own, settling me into a pleasant reverie that would be interrupted now and again by the insistent, shuddering tug of an electrified flash of fins and color arching out of the depths. 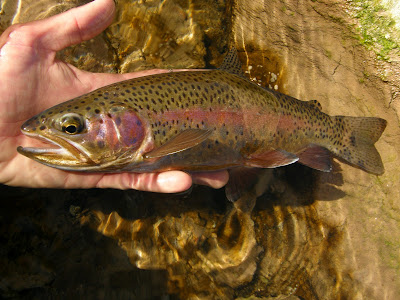 This jewel of a rainbow materialized from the dark blue-green flows of this reach, a 13-14"male that seemed to reflect and embody the bold hues of the surrounding landscape. 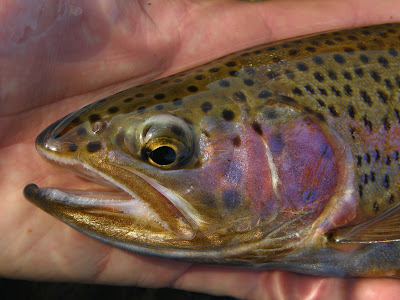 As afternoon approached evening, the ever-present cliffs bathed the changing currents in fractured orange and red.  This is one of my favorite times of day to to fish here, when it feels like I am casting and wading up through a painting, with the canvas swirling and shifting before my eyes. 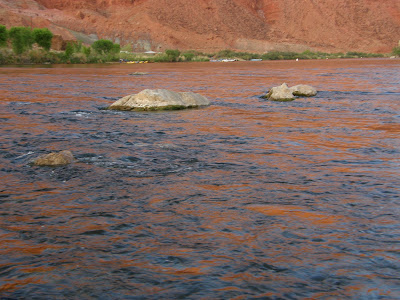 I prospected through the upper boulders area, hooking and losing a few good fish in the process (Lees Ferry trout are nothing if not accomplished escape artists), and then watched as the fly line shot underwater on another drift.  I lifted the rod, and felt the heavy resistance of a substantial fish on the other end of the line.  The trout sulked against the streambed, raced down and across current on several sizzling runs, and generally proved unyielding and remarkably strong.  I gradually moved towards shore, and coaxed the fish in the same direction, almost like trying to walk an unresponsive, stubborn dog. 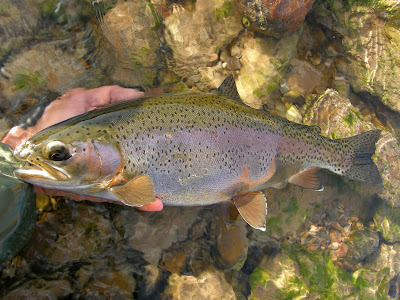 I never quite felt in control of the fight (big fish can have that effect), but finally, I managed to steer a football of a hen rainbow into the shallows.  The photograph doesn't do the trout justice, but she was in excellent condition, measured 18.5", and had an impressive girth, probably exceeding 3 lbs. 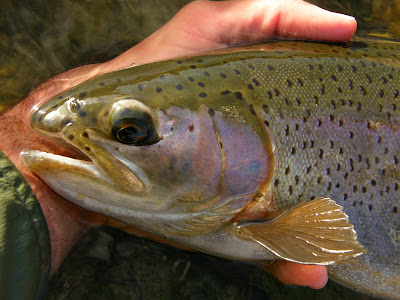 The heavy rainbow had a subdued coloration, but nonetheless stood as one of the more impressive trout I've landed at Lees Ferry.  I felt fortunate to bring the fish to hand, and took a few more moments appreciating the bow before slipping her back into the cold clear flows. 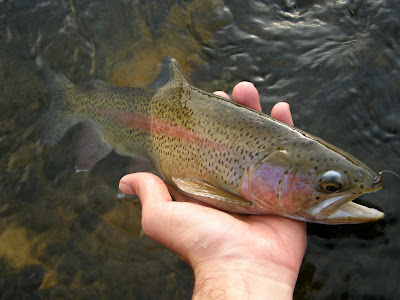 I fooled one last colorful rainbow for the day, this one a 15" male that moved for a #20 Brassie.  By this point, I had landed somewhere between 30 and 40 fish, and lost who knows how many more.  If time had allowed, I probably could have fished on and on, oblivious to the world outside of the river and its finned denizens. 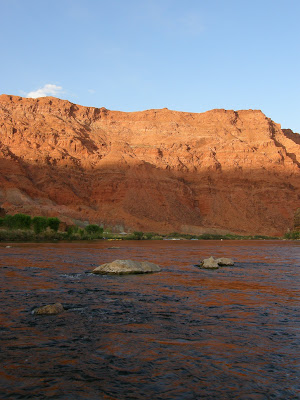 But evening descended quickly, the shadows grew long, and the sun set the last fiery light blazing upon the cliffs.  I figured it was a good time to call it a day, an exceptional day worth remembering.
Posted by Iain Emmons at 2:05 PM