Occasionally, the opportunity arises to mix work with pleasure, and I made the most of a survey week to the Mogollon Rim east of Payson in mid May, bookending the trip with fishing excursions to a couple streams I had wanted to explore. 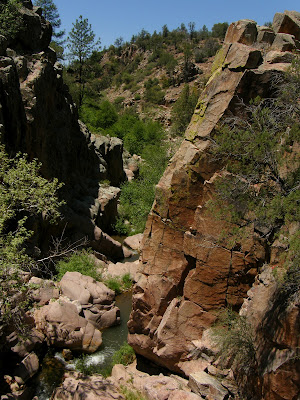 I prospected along one stream that quickly descended into a canyon at the start of the trip.  Plunge pools beckoned below angular cliff walls, and polished boulders created challenging, even treacherous conditions for streamside travel. 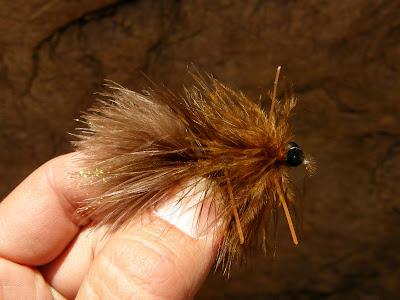 When fishing a new backcountry Arizona stream (particularly one with a healthy crayfish population and the potential for larger fish), I usually begin by tying on a #10 crawbugger, and this outing proved no exception.  I worked the streamer through a number of likely pools and runs, and received some enthusiastic strikes, primarily from hatchery bows that had drifted downstream from easier access points, and also smaller, wild rainbows eager for a substantial meal.  Rumors of larger resident browns swirl around this creek, especially in the less accessible canyon sections, but they proved mostly elusive on this day. 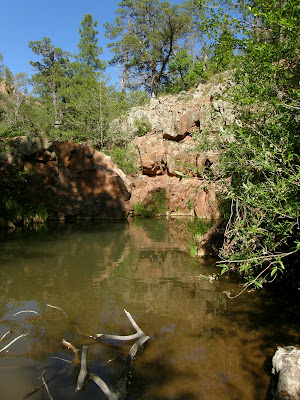 I spent some time casting and stripping a few subsurface patterns through the pool above, and finally fooled a good rainbow on a #12 krystal hare nymph, cast towards the shadows of overhanging tree limbs.  The fish stretched just beyond a foot, featured some rich coloration and abundant spotting, and had the distinction of being the largest wild rainbow of the trip. 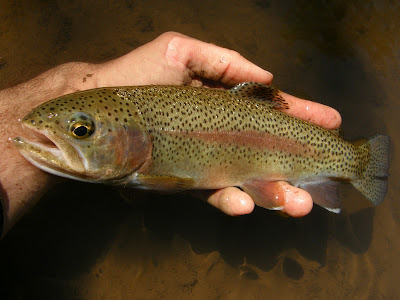 As evening approached, shadows swallowed the stream beneath the canyon, and I cast a crawbugger up into a deep pool in the waning light.  As the streamer drifted back towards me on the second or third cast, the line went taut, and a heavy unseen fish ripped about the run.  After an extended fight, the fly simply came loose, leaving that empty, deflated space behind.  I felt encouraged at hooking whatever lurked in the hole though, and vowed to revisit the spot early in the morning on the following day, before meeting up with some folks to conduct fisheries and wildlife surveys. 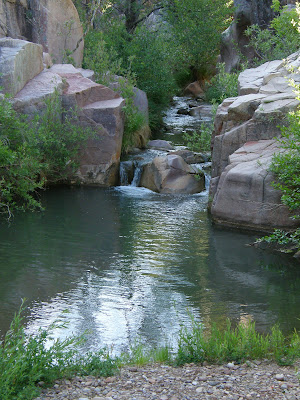 I clambered back down along scree and rocky slopes in the cool dawn air, and found the pool still cloaked in shade, with the first golden rays of the coming day just beginning to highlight outstretched branches and cliff tops.  I drifted and stripped a streamer under the dark liquid surface, and sure enough, a violent strike rocked the end of my line once again, no doubt the brute that had escaped the night before.  I did my best to play the fish aggressively yet carefully, and steered it away from an undercut bank draped with grasses and tippet-busting tree limbs.  The tippet held, the fish returned to the depths at the center of the pool, and finally I coaxed a thick 20" hen brown to the shallows. 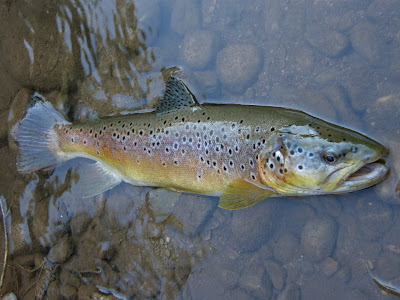 The brown possessed a classic beauty, with black spots scattered across warm hues shifting from olive to russet gold, and an impressive girth for its size.  I felt some hard bulges in its belly, probably a few unfortunate crayfish that the big trout had recently consumed.  The fish also had a few indentations on the right side of its head and gill plate, perhaps the failed attempts of a predator, or an angler that had planned to keep the bruiser.  The larger browns in these streams are survivors though, and it is always with a sense of awe and humility that I feel when having the good fortune to land one, and then return the trout to its murky, concealed haunt. 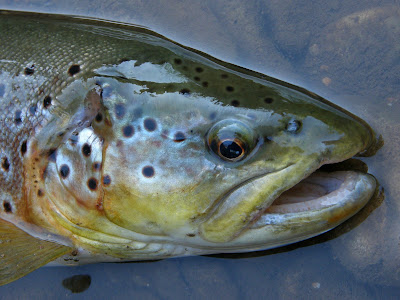 The brown marked an early highlight for the trip, and a good start to further wanderings featuring wild country and beautiful trout, always a happy wedding for fly fishing.
Posted by Iain Emmons at 2:08 PM