I finished up my "work and play" trip by revisiting the creek that I had fished a couple days earlier, but this time headed further downstream where the water cuts into some truly rugged country, in search of a few seldom-visited trout. 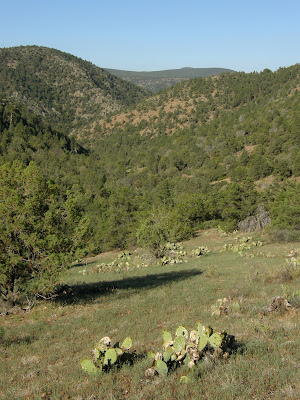 I hiked down a side wash from a bluff dotted with prickly pear, and soon found myself surrounded by vivid multicolored cliffs and emerald streamside vegetation hugging the precious cool water. 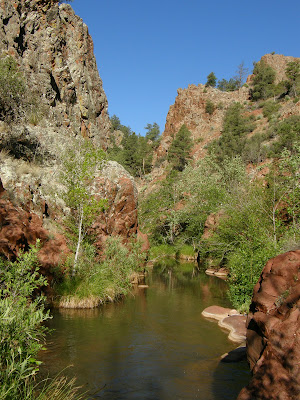 I quickly encountered some deep pools with murky water that seemed to scream out the presence of lurking predatory browns, and steep rock walls that were more appropriate for canyoneering than fly fishing. 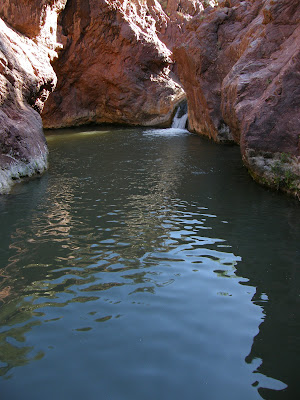 I carefully negotiated around the pool above with a natural barrier falls at the head, and proceeded to work a Crawbugger through the depths.  I hooked at least one hefty fish that I believe was a good trout, but the fly simply came out after a few head-shaking runs. 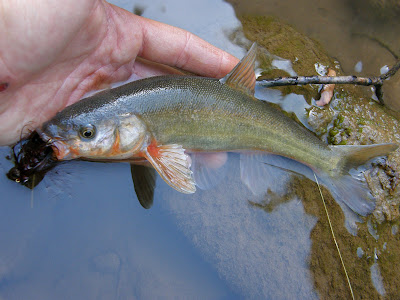 I did find a few modest-sized round-tailed chubs, or one of the other recently identified and closely-related species that can only be differentiated by genetic testing.  In any case, this fish fought hard, and somehow managed to fit the streamer in its mouth. 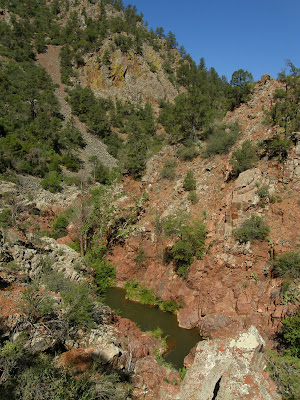 Arizona features an abundance of remote wild country, particularly along streams cutting through rugged canyons, but this area had to rank up there as one of the more inaccessible I have had the pleasure to explore. 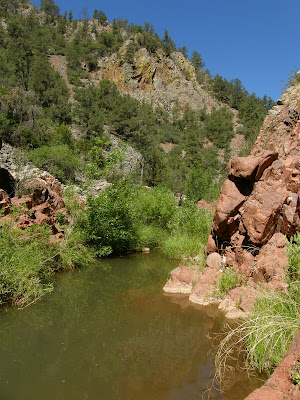 I brought another chub to hand from this discolored pool, this time on one of my #12 BH Krystal Hare Nymphs. 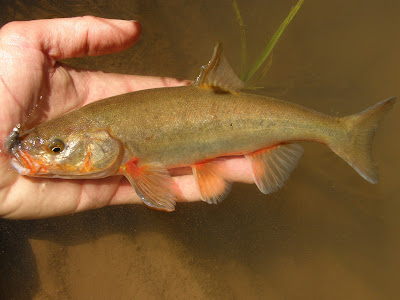 I continued downstream a bit farther, and missed a few decent-sized fish (both wild bows and chubs), but decided to turn around at this canyon pool and return back upstream, to explore the creek above and eventually loop back to my starting point.  It crossed my mind that this would not be a good place to get injured, given the jagged isolated nature of the landscape.  On the other hand, one of the real joys of this place was its wildness and the lack of any sign of humanity, and I felt humbled and fortunate to be able to dwell for a time in such a place. 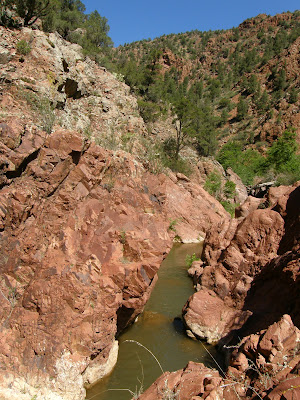 At this point though, I had not brought a trout to hand, and I was starting to get anxious to bring a few wild browns and bows to hand.  I spied the pool below, and stripped a Crawbugger through the run, letting the streamer pause and sink from time to time. 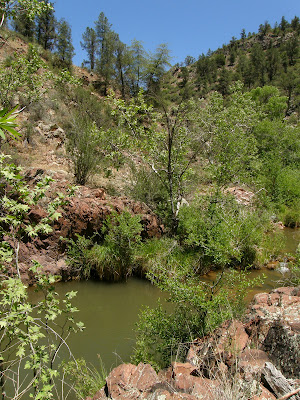 After a number of casts, I received a slow steady tug that transformed into an unyielding weight.  I saw a golden flash, and knew that a good brown had inhaled the crayfish pattern. 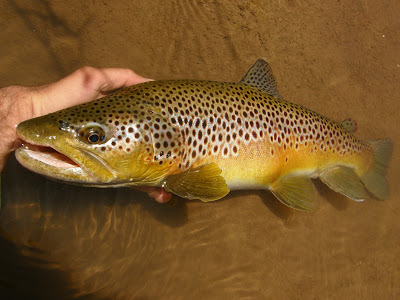 The bruiser dogged down deep and made some short yet spirited runs, but eventually I coaxed a beefy 21" male brown into the shallows, and took a moment to admire the rich orange and yellow hues, leopard spotting, and toothy jaws.  I also noticed a bulge in the middle of the trout's belly, and it felt an awful lot like a good-sized crayfish--the bigger fish here undoubtedly key in on substantial meals! 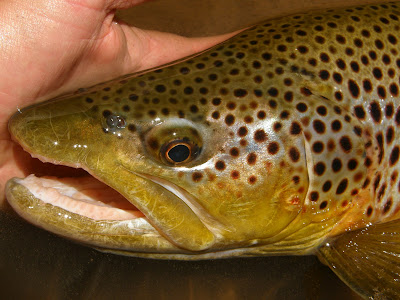 I returned the brown to his lair, and savored the contentment of a heavy wild fish landed in beautiful lonely surroundings. 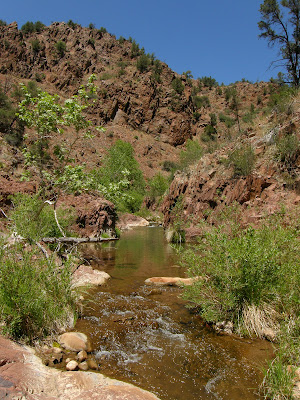 I continued upstream, and every turn introduced another impressive set of twisted, multi-faceted rock formations and quiet pools. 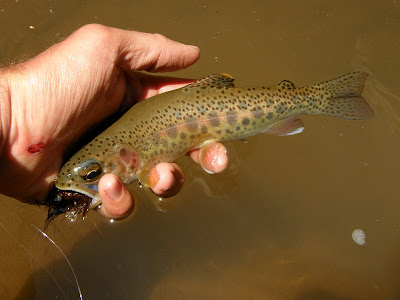 Trout turned up here and there too, such as this small wild rainbow.  Like the chub earlier, it somehow found a way to fit the bulky streamer inside its mouth. 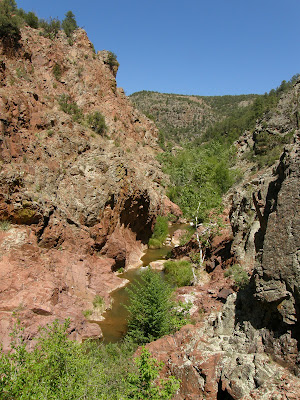 The canyon country here was inspiring and a bit spooky at the same time, and I got the feeling that few people venture through in any given year. 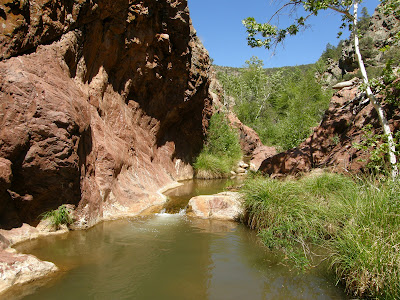 This pool gave up a football-shaped brown of 16"that fled with a flick of its tail before I could get a picture. 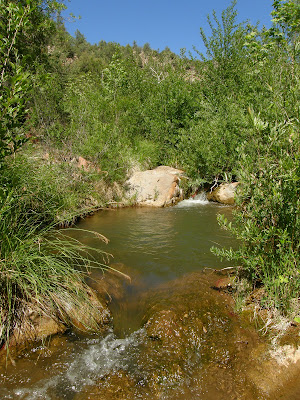 Several rainbows held in this scooped out bowl of a pool near the whitewater at the head, including one hatchery bow that somehow made it this far downstream. 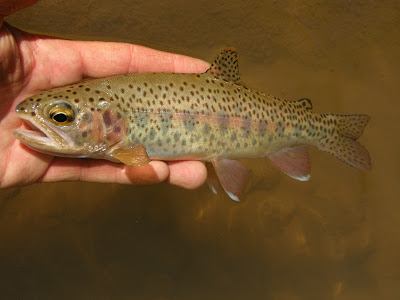 But the remaining fish were wild and lovely, including the two pictured here, with the rainbow below even starting to put on a little size. 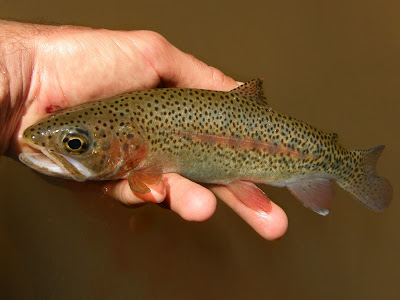 A brown approaching 20" also spooked from beneath an undercut bank in a deceptive shallow run downstream, a fish that made me suspect that I was missing other good fish along the way. 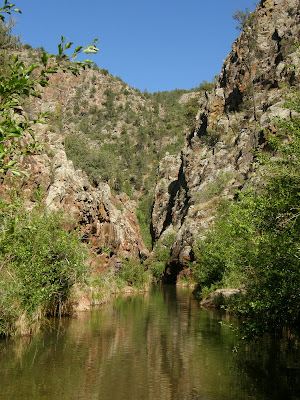 In fact, I came across multiple deep pools that I am convinced held a larger brown or two, but for whatever reason they did not come out to play. 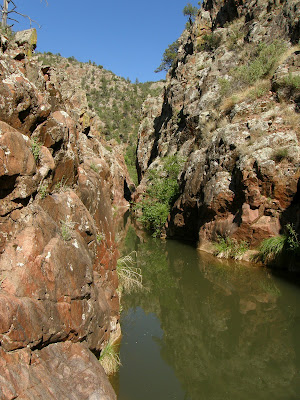 The pool above required a bit of rock-climbing to get up and around, or a swim through the middle, and I elected the former. 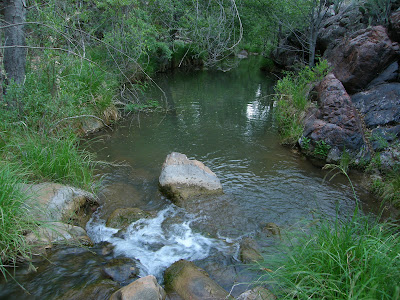 The sun crept behind the canyon walls all too soon, and I knew the day's adventures were coming to a close.  Fortunately, I managed to attract the attentions of one last good fish from the pool pictured above, by casting a Crawbugger towards the lush vegetation near the bank and letting it sink. 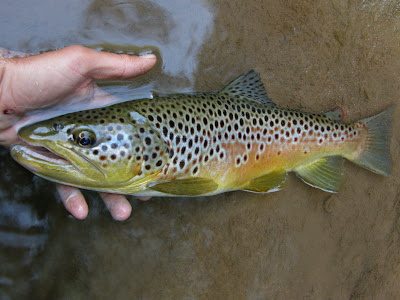 Another beauty of a brown struck, and I soon brought another colorful, heavily spotted male to hand, this one just shy of 18".  I wondered whether this fish had ever seen an angler before, as the buck slipped away from my grasp, merging back into the olive green flows. 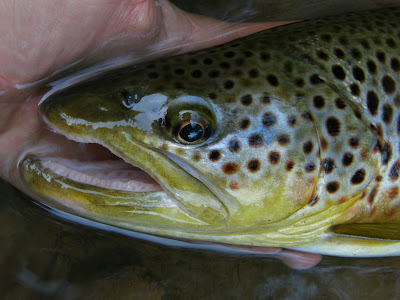 As twilight settled, I bushwhacked my way out from the remote canyon stream with a twinge of regret to leave, but glad to know that such wild places and trout thrive in relative anonymity, there to be discovered anew by the adventurous.
Posted by Iain Emmons at 2:09 PM